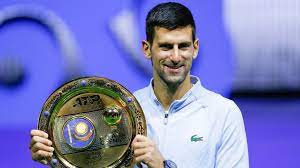 After dominating Stefanos Tsitsipas in straight sets in the ATP final on Sunday in Astana, Novak Djokovic won his 90th career title and fourth in 2022.

In 75 minutes, the 35-year-old Djokovic prevailed 6-3, 6-4 to add this trophy to those he has already won this year in Israel, Rome, and Wimbledon.

The fourth seed won his ninth straight match, and as a result of the victory, he secured a place at the 2022 ATP Finals.

A week ago, the Serb triumphed in Tel Aviv, his first singles match since claiming his seventh Wimbledon victory and 21st Grand Slam championship in July.

He was banned from the US Open and the entire North American hard court swing over his refusal to be vaccinated before returning for Roger Federer’s farewell in the Laver Cup team event in London last month.