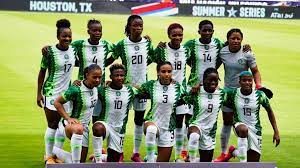 The Super Falcons rise one spot in the most recent FIFA rankings.

Super Falcons lost 4-0 and 2-1 in back-to-back games to the world champion United States, and they most recently fell to Japan 2-0 in Kobe.

The Super Falcons are currently ranked 45th in the world, up from 46th in the most recent rating that was made public today.

They kept their ranking as the best squad on the African continent.

Meanwhile, South African Bayana Bayana are now rated second in Africa and 54th in the world.