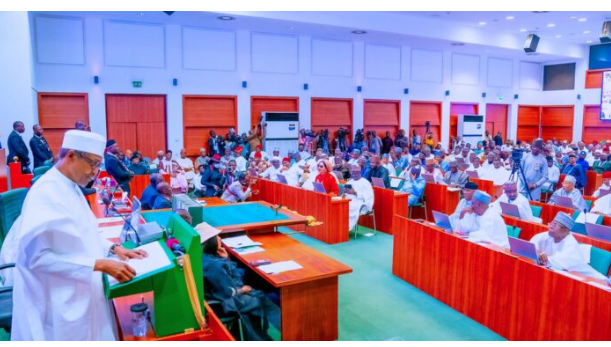 President Buhari at the 2023 Budget Presentation in NASS

President Muhammadu Buhari has on Friday presented the 2023 budget proposal to a joint session of the National Assembly.

President Buhari, who addressed the joint session of lawmakers from the two chambers of the legislative arm, unveiled a budget of N20.51 trillion with a crude oil benchmark price of $70 per barrel, daily oil production estimate of 1.69 million barrels per day, and exchange rate of 435.57 Naira per US Dollar for the 2023 fiscal year.

While giving a breakdown, the President said the 2023 transition budget was designed to address critical issues and lay a solid foundation for the incoming administration.

Buhari said N744.11 billion is for statutory transfers, N8.27 trillion for non-debt recurrent expenditure, and N5.35 trillion for capital expenditure, while the 2023 Budget deficit is projected at N10.78 trillion

The president stated that the budget deficit will be financed mainly by new borrowings.

President of the Senate, Ahmad Lawan, in his opening remarks, commended President Buhari's administration for being consistent in the delivery of landmark infrastructure across the country saying that with the 2023 budget,  it is important to prioritize the completion of ongoing projects.

Speaking on how to reverse the increasing trend of deficits in the nation's budget, Lawan lamented that generation and collection of revenues have remained Nigeria’s major challenges due to massive loss of revenue through oil theft.

The 2023 budget is named Fiscal Sustainability and Transition.