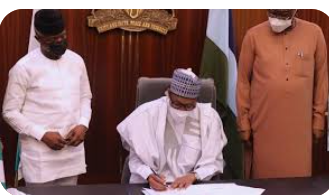 The Federal Executive Council today deliberated on the draft 2023 Budget estimates, which would be presented by President Muhammadu Buhari  to the joint session of the National Assembly on Friday October 7.

Special Adviser to the President, Femi Adesina disclosed this after the hybrid Council meeting  which was presided over by President Buhari  at the State House, Abuja.

Adeshina said the presidency is giving the National Assembly the honor of receiving it first before it is made public.

Adeshina said final approved copy that was deliberated on includes the revised 2023/2025 physical framework, expenditures profile, Budget proposal aggregate expenditures personnel cost among others will be presented on Friday.

Rotimj Asewuyi report that those Present at the meeting includees the Vice President Yemi Osinbajo, Secretary to the Government of the Federation, Boss Mustapha Chief of Staff to the President, Professor Ibrahim Gambari and Head of the Service of the Federation, Dr Folasade Yemi-Esan, Finance Budget and national Planning, Zainab Ahmed as well as Minister of Budget and National Planning Clement Agba and Environment, Udi Odum among others