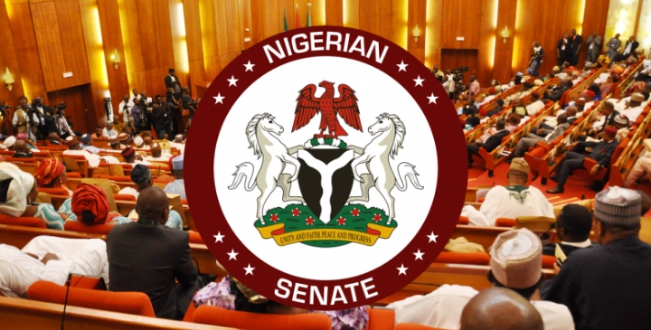 The approval follows the adoption of recommendations made by its Joint committee on Finance , National Planning and Economic Affairs.

However, lawmakers were divided over one of the committee’s recommendations that suggests the cost of Subsidy be capped at N1.7. Trillion which is less than the N3.6 Trillion initially proposed by the Executive.

The Nigerian Senate has hit the ground running with preparations to Receive President Muhammadu Buhari’s Presentation of the 2023 Appropriation Bill  on Friday.

Wednesday plenary was in preparation to receiving President Muhammdu Buhari on Friday.
The plenary look longer hours than usuals. At  Plenary, the Senators considered the report by its Joint Committee on the 2023 - 2025 Medium Term Expenditure Framework and Fiscal Strategy Paper.
And Recommendations we're made, the committee proposes that the cost of Petroleum Subsidy be crowned at 1.7 trillion, different from it initial 3.6 trillion  proposed by the executive.
However, some lawmakers strongly kicked against this recommendation arguing that it is not feasible and should be reversed to the original Figure. This sprang up heated argument amongst the senators.
After extensive Debate , the Senate adopted the recommendation as Amended after being put to a voice vote .
In view of these Current realities, the Oil Benchmark is pegged at $70 per barrel, Daily crude oil production is at 1.69mbpd and the Exchange Rate at N435 to a dollar.
Also the Federal Government retained Revenue stands at N8.46 trillion, GDP growth rate is at 3.75% and inflation growth rate is projected to be 17.16%
The Senate further recommended a comprehensive review of waiver policy to ensure that only companies engaged in manufacturing and production are granted such waivers.