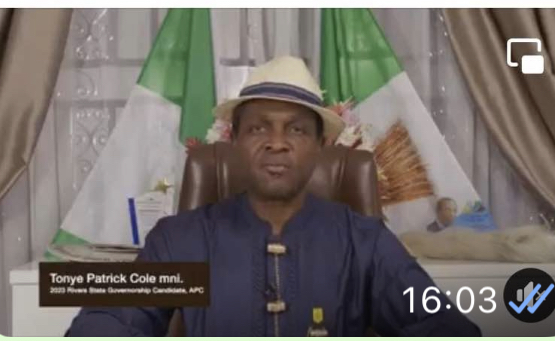 As you have probably heard, The Rivers State government recently withdrew the case it instituted against my person for lack of merit.

The state government had hoped they would be able to use their power to intimidate the judiciary to do their bidding, but we are grateful that our judiciary has shown itself to be upright and above reproach.

I salute the courage of our judiciary and commend it’s leadership for the message of incorruptibility which they have sent to everyone who thought they could pervert justice through intimidation.

This election is different - it is about the people of Rivers State. My people, I am for you  and support your aspiration to escape poverty through better education, employment opportunities and access to healthcare for you and your families. If our families prosper, River State prospers, so my entire movement is to make this shared prosperity a reality in all of our communities.

There will be more battles ahead, but I will stand for you, my people, emboldened by your support and belief in our movement.

For anyone seeking to intimidate any law abiding supporters around the state, you will find our resistance swift and firm.