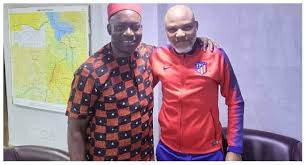 Recall that Ohanaeze through Chief Damian Okeke -Ogene, the Vice President of Ohaneze Ndigbo Worldwide, in a press statement released in Awka, said “We commend Soludo for his strong political will in calling for the unconditional release of the detained Biafra agitator, and volunteering to stand as his surety.

“Such decision has further demonstrated his commitment in championing the cause of Ndigbo and protecting the interests of the people, not only in Anambra State, but the entire Southeast zone.

A socio political analyst, community leader and guest on Atlantic Television Network’s Blow Out, Chief Loveday Okere said “Soludo is one of the prominent leaders in Igbo land, even if he is not the governor of anamnrbta state, just like so many others from that zone, but Soludo is wearing a double cap now. Aside him being a prominent citizen, he is the executive governor of Anambra state. Anambra state can be described as one of the hub of IPOB, so he wears the shoes and he knows where it pinches”

Chief Okere said the move by Soludo is commendable though he has immunity, however IPOB’s angst towards him is not clear, except they have something else in mind. He said, “the most important thing is for Nnamdi Kanu to get off the hook, come back home and strategize to see if some of those primary objective of forming IPOB can be achieved”

Chief Okere said Ohanaeze should not compel anyone to join voices to demand Kanu’s release. He wonders the possibility of having them unite now. However, He said “on individual basis, there are other prominent citizens in Igbo land that can also call for unconditional release of Nnamdi Kanu”

Speaking on Soludo’s reason for the call, Chief Okere reemphasizes that Anambra state is one of the hub, head quarters of the activities of IPOB. He said, “The activities of IPOB is affecting Anambra state more, either positively or negatively. Soludo is feeling more of the impact. He said the history of deaths resulting from the  struggle, certain persons who died, including prominent citizens like Dr Akunyili in anambra state, so Soludo is feeling it more.

Chief Okere said as a personal opinion, recently, Soludo’s write up against Obi gave him a lot of bashing from Igbo land. Said Soludo is trying to bring up this as a kind of damage control, to save his face in Igbo land