ONE BEST WAY TO MOTIVATE ATLETES IN NIGERIA. 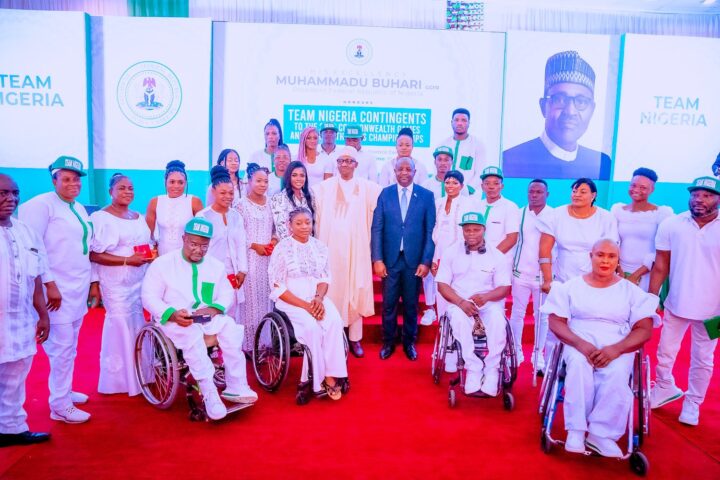 Extrinsic rewards are central to competitive sports; athletes receive publicity, awards, and money, among other thing can elevate them to achieving higher strides.

At the Tokyo 2020 Paralympics, Tijani won Nigeria’s first gold medal in the women’s 45kg para-powerlifting, while Ogunkunle lost at the quarter finals in the para-table tennis.

Abiodun hosted and rewarded Tijani and Ogunkunle alongside Adesokan Dorcas, who a won gold medal at the All Africa Games, Morocco 2019.

The Governor rewarded each of them with one million naira for their exploits in international competitions. The governor also gave the coaches the sum of N500,000 each for their contribution to the success of the athletes.

In August 2022, President Muhammadu Buhari hosted members of Nigeria’s contingent to the recently concluded 22nd edition of the Commonwealth Games staged in Birmingham in England, at the Aso Rock Villa, Abuja, at a colourful ceremony. The highpoint of the reception was the award of national honours and cash rewards to the medal-winning athletes that made Nigeria proud at the Games.

A total of 54 member countries, represented by 5,054 athletes, descended on the beautiful city and competed for honours in over 283 events in 20 sports.

Nigeria posted her best performance in the annals of the jamboree with a total of 35 medals, broken down to 12 gold, nine silver and 14 bronze to place 7th on the overall medals table at the fall of the curtains on the 11-day Games. By that stellar outing, Nigeria came first among member nations from Africa, beating her traditional foes, South Africa, to the 9th place.

What made Nigeria’s victory spectacular was the sizeable contingent of 94 sportsmen and women with athletes taking the lion’s share of 33 runners in her 15th appearance in the quadrennial Games. It was a complete departure from the old tradition of presenting unwieldy number of contingents with estacode-crazy officials accounting for about 40 per cent.

Also worthy of note was the choice of sports in which Nigeria has comparative advantages, namely athletics, wrestling, judo, boxing, para-athletics, para-weightlifting, para-table tennis, table tennis and weightlifting, sweeping medals across the sports. The only black leg was Grace Nwokocha who was provisionally suspended by the Athletics Integrity Unit (AIU) for doping. Grace ran Nigeria’s anchor leg in the 4×100 women’s relay final.

Among the athletes who made Nigeria proud and were deservedly honoured were the new kid on the block and serial record-breaker, Tobi Amusan. After some initial setbacks in her meteoric rise to stardom, Tobi emerged as the phoenix from the ashes and announced her final arrival at the World Athletics Championships held at Oregon, in the United States of America a couple of months ago where she displayed her passion not only for winning gold medals in her favourite 100m hurdles event but also smashing records into the bargain. The technically gifted and fast runner has gone ahead to set more records across many meets.

Speaking at the grand reception, President Buhari expressed delight at the great honours the athletes won at the Games. He pledged to reward outstanding performances by the Nigerian athletes and described them as worthy ambassadors.

He said, “I am very pleased that you displayed at both personal and group levels great sporting talents and delivered for your country great podium performances.”

The President also bestowed the deserving athletes with the national honours of the Officer of the Order of the Niger (OON) and a cash reward of N200m to members of Team Nigeria.

It is the second time the nation’s sportsmen and women would be so honoured by a sitting president. The first time was in 1980 when the Green Eagles won the Nations Cup Tournament in Lagos during the regime of Alhaji Shehu Shagari with houses to boot.