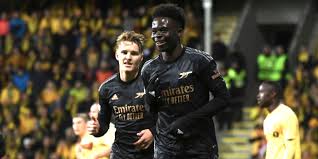 Mikel Arteta wants to see further improvement from Arsenal despite making it six wins on the trot with a hard-fought 1-0 away victory over Bodo/Glimt in the Europa League.

Bukayo Saka's deflected 24th-minute goal gave the Gunners the lead, but they faced serious pressure in the second half as their hosts pushed for an equaliser.

The Norwegian champions' attempts to maintain their run of 14 straight home victories in European competition was ultimately ended however as their visitors clung on for 11 wins across 12 games this season.

Speaking afterwards however, Arteta acknowledged his side needed to up their game on the whole, despite professing his satisfaction with another taut triumph.