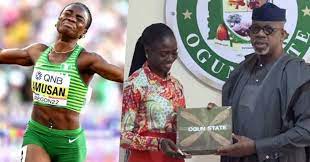 The reward from Gov. Abiodun is in celebration of Amusan’s World Championship and Commonwealth Games feats in the 100m women’s hurdles.

This is coming weeks after President Muhammadu Buhari conferred on the world champion the national honour of Order of the Niger (OON).

In her remarks, Amusan, while acknowledging the support of Abiodun towards her success, called on the Federal Government to do more for athletes.

Meanwhile, her coach, Abiola Onakoya, also noted that the world champion was already giving back to the society through an athletics development programme named the Tobi/Abiola Grassroots Sports Development in Ogun State.